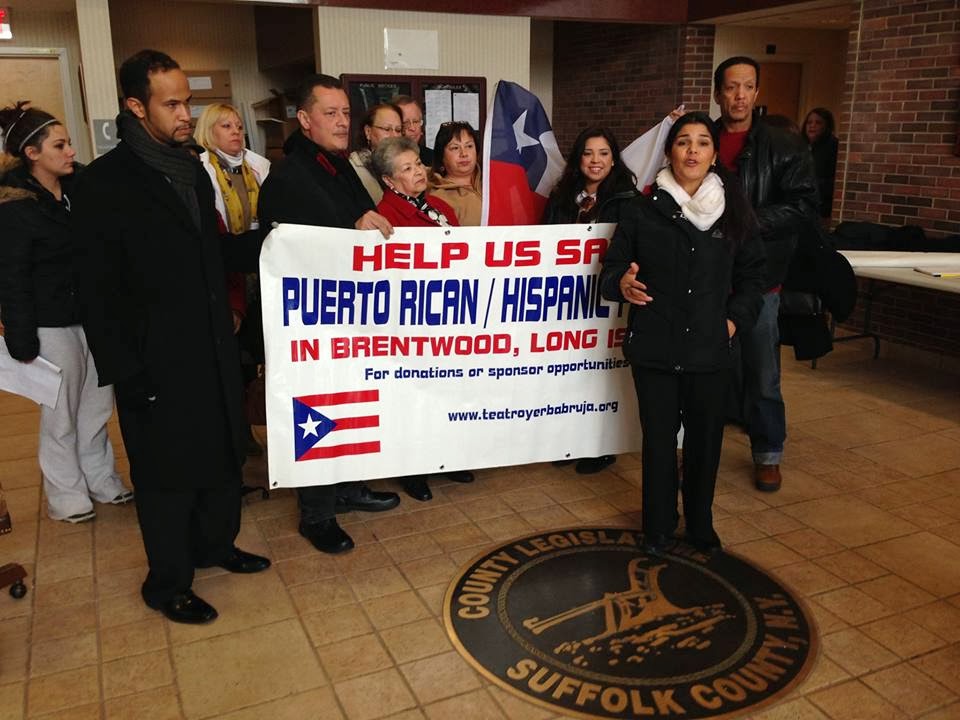 Originally published: February 25, 2014 7:22 PM
Updated: February 25, 2014 9:40 PM
By VÍCTOR MANUEL RAMOS  victor.ramos@newsday.com
Organizers of the Puerto Rican/Hispanic Day Parade held annually in Brentwood worry the event is in peril again, with nearly $31,000 in promised funds from the Suffolk County Legislature put on hold until the nonprofit group straightens out its books.
Organizers with Teatro Yerbabruja blamed the district's new representative, Legis. Monica Martinez, after she introduced a resolution that would have given $5,000 of their funds to the Long Island Latino Teachers Association for a summer camp program. The parade group got about $21,000 in county money last year and $20,000 in 2012.
The resolution was withdrawn Tuesday from the calendar of the legislature's budget and finance committee. But the move angered the nonprofit's members.
"It's totally offensive, it's an abuse of power" to take money from the parade, said Margarita Espada, Teatro Yerbabruja's director. "We need to keep the resources that we need to put together a beautiful parade, vendors, parades, float, music, everything including the festival."
Martinez said her intent was to make sure that funds allocated to her district were used rather than lost while the parade's organizers work "to correct the discrepancies" in the group's financial reports.
The issues affecting the event are unrelated to turmoil faced by New York City's National Puerto Rican Day Parade.
Brentwood's event, held annually for 47 years and billed by organizers as Long Island's largest ethnic parade, almost disappeared in 2012 because of lack of money. The event, usually held in June, was taken over by the new organization and saved through fundraising, including the $30,840 approved by the Legislature when Rick Montano, Martinez's predecessor, was in office.
Financial reports about the use of those funds have come into question. The group's filings showed it did not comply with a county rule mandating administrative costs below 20 percent. The parade organization was one of 36 agencies and organizations that had not met the standard in 2012. Teatro Yerbabruja's administrative costs that year were pegged at 59 percent, according to the office of county Comptroller Joseph Sawicki Jr., who testified at the committee meeting.
Steve Bard, Teatro Yerbabruja's board president, said the group spent 16.2 percent in administrative expenses but didn't itemize those costs in filings because "we didn't know about this rule." He is working to correct the group's reports.
Martinez said her office was tasked by the county to tell the group it was "out of compliance" and needed to fix the issue with the comptroller. "I do not want to get rid of the parade . . ." she said. "I know they've been doing a great job, and I hope that they do a great job this year, but they need to get those papers fixed first."
http://www.newsday.com/long-island/suffolk/brentwood-puerto-rican-parade-may-lack-funding-1.7207698?firstfree=yes